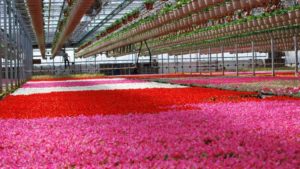 “We had been talking to them for a couple years, and we liked the fact that they are a third-generation family owned business with a good reputation in the industry and a solid customer base,” says Dan Totushek, President of Dan and Jerry’s Greenhouses. “These were all important factors for us.”

Totushek also says the differences between the companies’ product lines will give Dan and Jerry’s a chance to expand its customer base.

“We primarily grow spring bedding plants, and they do a lot of year-round potted floral crops,” Totushek says. “This gives us an opportunity to expand their product line to some of our customer base, and an opportunity for us to connect with their customers.” In particular, Totushek says DeJong’s location in central Iowa will give Dan and Jerry’s a more localized point to connect with customers. “Their staff members are certainly committed to quality,” Totushek says. “We hold a lot of the same cultural values, so it’s working out well.”

DeJong Greenhouses is an 80-year-old business that has been continuously family owned. It has three major production locations, two in Pella and one in Oskaloosa, IA. It delivers to major retailers and landscapers throughout Iowa and in the Kansas City, Omaha, and St. Louis markets.